The Owen Sound Cross Country Ski Club is pleased to dedicate one of the trails at the Massie Hills Ski Trails in honour of founding member and avid skier Bill Georgas.

Bill Georgas, Harold Lendon and Cecile Moses started the OSCCSC in the late 70’s with a trail in Harrison Park. Bill was the President for the first year, handing the position to George Kraemer the following year.

In the beginning the Harrison Park trail along the east side of the Sydenham River was impassable until tireless volunteer Bill Georgas cut a trail with a pick and shovel along the clay bank just south of the bridge behind the Conservation Authority. The Harrison Park trail was expanded over the next few years to include a trail to Inglis Falls. The Ski Club eventually created a trail system around a section of the Bruce Trail north of Massie that has become the Massie Hills Trails we know today.

Bill was an exceptional cross country skier and was often seen on his rollerblades on the roads around Owen Sound. He was still rollerblading at 89, shortly before he passed away on July 30, 2007 leaving his wife Helen and children Betty Jane, Christopher and Kathy.

Made possible by a generous donation from his grandson Rod Graham, the Owen Sound Cross Country Ski Club is pleased to dedicate a section of the Massie Hills Trail in honour of founding member and committed local sportsman Bill Georgas.

The Bill Georgas Trail begins at the Bruce Trail and winds through a pine and spruce plantation which is home to a thriving rabbit population, then through an uplands hardwood forest, over a small stream and past an open wetland fringed with hemlock trees, returning finally to the Bruce Trail again. I am sure that Bill would enjoy the thought of others skiing on his trail for generations to come.

A video tour of Massie Hills »

Day-Use Fees
$10 per person
$20 for a family of up to 4
Please leave fees in the locked boxes at either entrance.
Members ski free! 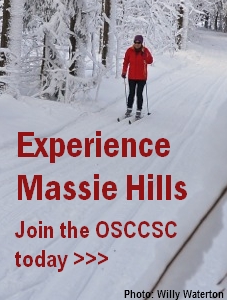